You can also email your reservation by emailing monkeybusinesscomedyclub@yahoo.co.uk
and we will send you back an email confirming your booking to pay cash at the door.

Award-winning very funny MARK SIMMONS Mark is an exceptional one-liner comedian. It won him a place in Dave’s prestigious Best Joke of The Fringe in Edinburgh 2017. His solo show at the festival, One-Linerer was also a huge hit, with sell out shows every day and was nominated Best Show by the Amused Moose Comedy Award Fringe Show 2017. He then continued this success with his follow-up show, One-Linererer, which was also a sell out! “Master of one liners” one4review ★★★★★ Mark is constantly on the rise and since being in the finals of several noteworthy competitions, such as Leicester Mercury Comedian of The Year, So You Think You’re Funny and the NATY Award, he has been in high demand for the top UK comedy clubs, such as Glee, Manford’s Comedy Club, Comedy Central and Just The Tonic, headlining the majority of them. Also, he has been recently supporting Seann Walsh, Rob Beckett and Rob Brydon on their national tours, as well as one off shows supporting Michael McIntyre, Sean Lock and Jack Dee. “Simmons delivered a lot of excellent funny one liners in a ten-minute set which raced by. I loved his subtle, well-paced delivery and the way he deliberately misdirected the audience using his tone of voice before surprising them with a line which was the last thing they expected…hilarious.” Bruce Dessau, Beyond The Joke Mark’s TV presence is also growing. As well as recently recording a couple of TV pilots, he has starred in the hit BBC3 documentary One for The Road, where a film crew followed him alongside Seann Walsh on tour in the Scottish Highlands. Also, online, Mark can be seen in his comical web-series, Mark Simmons – The Face Of… “Absolutely hilarious.” The Scotsman ★★★★“A talented comic with an artisan’s grasp of joke-writing” Chortle ★★★★ “Gags of the highest order” Broadway Baby ★★★★Edinburgh Festival Magazine ★★★★ | Bunbury Magazine ★★★★★“Perfectly timed, clever one-liners” Leicester Mercury“Very funny show” TIME OUT
PRESIDENT OBONJO 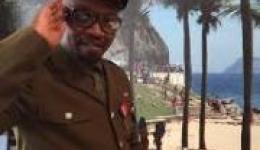 warm funny entertaining unique PRESIDENT OBONJO His name is President Obonjo. He was born in Liverpool to Nigerian parents. His Dad is from Akure and his Mum is from Warri. President Obonjo arrived in Nigeria in the early 70’s and left for the UK in 1985. Obonjo has been home twice since he left but has keept in touch with the state of the nation through social media and his fan base in Nigeria. President Obonjo, has been holding sway in the comedy world outside Nigeria, particularly in his country of birth where he currently resides (England). Through his sheer tenacity of purpose in what he knows how to do best, he has undoubtedly taken comedy to another phase through the use of animations, audio/audio-visual displays and other creative graphics all for the entertainment of his teeming fans especially those on Facebook,Youtube and other medium of mass communication. From a recent survey Obonjo has successfully broken the jinx of making comedy only a task that can be exhibited on stage but a brain tasking initiative poised at ameliorating stress in people, to make them unwind irrespective of where they are, be it parties, shows, retreats, seminars, on the internet (facebook), radio, television, print media etc. The only Social media comedian to run for Presidency to meet Obama, Clintion through photoshop, To use Social media to launch a Comedy Career. President Obonjo has become a successful comedian because of his innovative use of the internet to engage with Lafta addicts online. The internet was part of an overall digital strategy that has turned thousands of supporters to embrace obonjomania. Now thousands are hooked on a daily dosage of Lafta and Obonjomania pill.
JERRY BAKEWELL

comedy magician CAMPBELL GLAZIER Connoisseur of Comedy, Master of Magic but not the Squire of Soup....That's the other Campbell.​​ I'm a comedy magician from Kent who sets out each day to achieve the impossible like convincing my mum this is a sustainable career path.​ Runner Up in Made In Kent a Comedy Competition Runner Up in Battle of The Wits - Faversham Brewery Finalist in New Act of The Year - The Met, Bury Survived Beat the frog - Frog and Bucket, Manchester Sold out one man show at the Faversham Fringe with a 4* review ‘so bloody good it’s annoying’ - Creek Fm Also appeared in a production of A Lad In Soho of which reviews included: **** - Queer Guru ‘Campbell brought his comical flair’ - love pop ups London
Venue:
Pembroke Castle
Start time:
20.30
Doors open:
20.00

by Camden guide and Kentishtowner

We are home to Britain`s best ,funniest Award-winning acts .